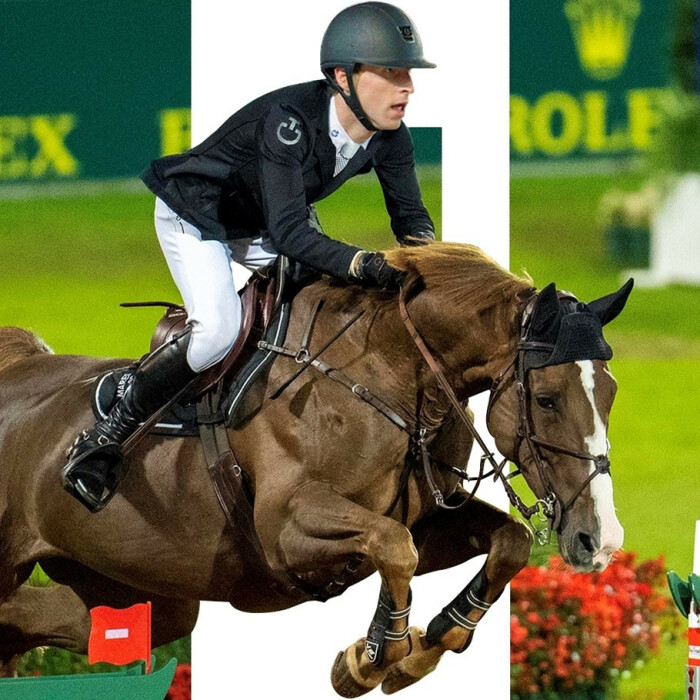 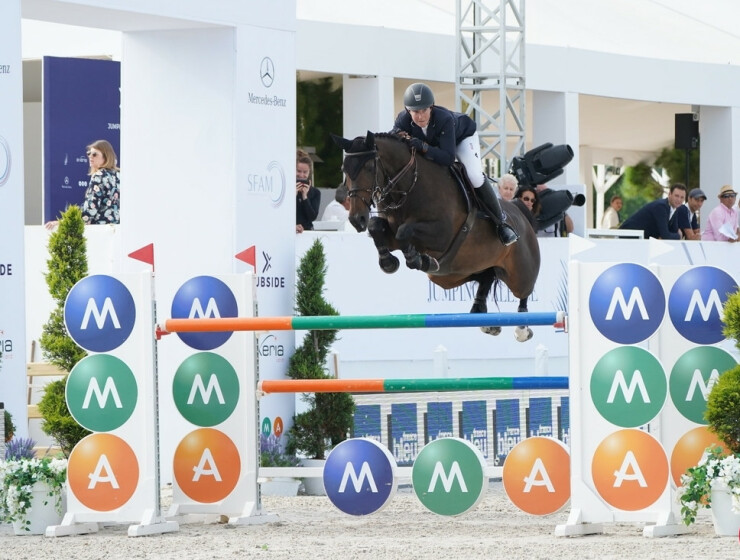 Born in Belgium, named after a city in Northern-Ireland, produced by a Columbian rider, sired by a Holsteiner, bred out of a French dam line and steered to success on both sides of the ocean by an Australian. Coleraine des Bergeries is a world citizen. This mare by the Olympic stallion Canturo is one of 4 horses out of dam Golden Dream, by Oberon du Moulin to reach 1.60m Grand Prix level.

The first was Malice des Bergeries, who won the Santander Grand Prix with Jesús Garmendia Echevarría. Rimbaud des Bergeries jumped in World Cups and Grand Prix with Leonardo Mambretti and Coleraine’s younger brother, Dreamer was placed in the Deeridge Nations Cup under Juan Pablo Betancourt.It was one year later, in 2020, that Coleraine jumped clear in the first round with 4 penalty points in the second round of the Nations Cup on the Australian team, finishing 3rd in the WEF Nations Cup one week later.

Since the age of 8, Coleraine has spent her career under Amy Graham, but before she went into the sport she gave birth to a filly by Untouchable. That filly is the dam of the promising youngster Kristalline des Bergeries. Several of Coleraine’s sisters have produced successful offspring, like Cerise des Brumes of McLain Ward, Ermes des Bergeries of José Ibáñez and Quicksilver of Eric Lombard. 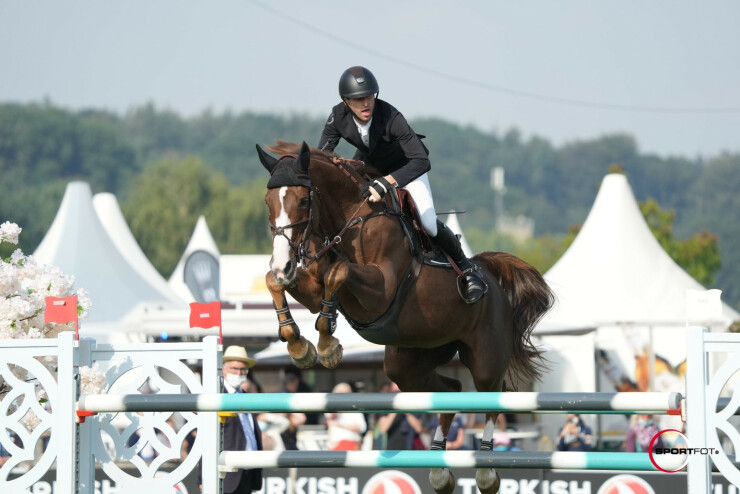 MoM’s Isaura is the first horse that Mares of Macha showed in the show jumping arena’s. Descending from a successful family and being a decorated show jumper herself, she ticks many MoM boxes. She is sired by the great Tinka’s Boy who won the Gothenburg World Cup Final, the Aachen Nations Cup and countless Grand Prix under Markus Fuchs. With the Swiss rider, Tinka’s Boy also competed in 3 European Championships and 2 Olympic Games in Sydney and Athens. His incredible toughness was the foundation for a career at the highest level that lasted nearly a decade!
MoM’s Isaura is a sister of the successful sporthorse and breeding stallion Elvis Ter Putte who was placed in the 1.60m Grand Prix of Windsor and who sired the sensational Levis de Muze.

Another sibling of Isaura is Lady-A ter Putte who was a very competitive international sport horse under Andres Vereecke. Lady- A is the dam of several liscenced stallions and promising young horses. 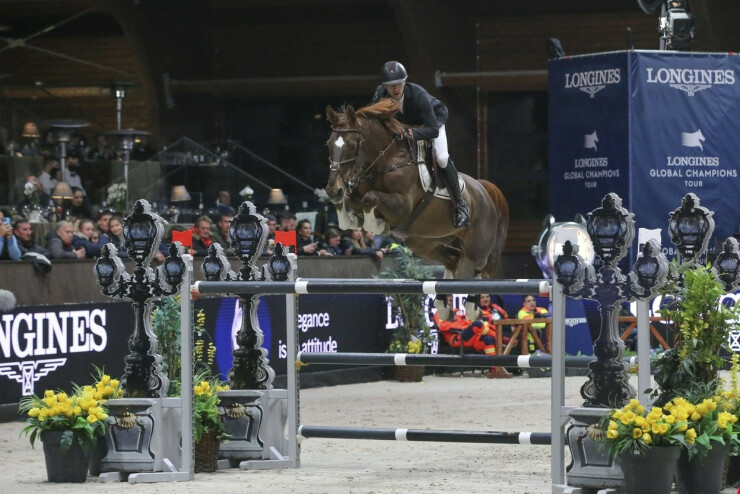 MoM’s Toupie de la Roque is a 12 international winner and her victories include the Amsterdam 5* Grand Prix and the London-Olympia World Cup and she came 2nd in the Mechelen 5* Grand Prix where she was beaten by 0.05 seconds.

Toupie is a sister of 3 other 1.50m to 1.60m horses, including Daytona de Muze. A non-performing sister of Toupie is the famous Centa de Regor who is the dam of the 1.60m Grand Prix horses Freestyle de Muze and Horizon de Regor. All are bred out of Toupie’s dam, the Grand Prix mare Walloon de Muze who was placed in the Canteleu 1.60m Grand Prix with Cedric Boulanger.

Walloon is a sister of some of the world’s greatest sport horses like Narcotique de Muze of Eric Lamaze, Walnut de Muze of Harrie Smolders, Werly Chin de Muze of Richard Davenport.

So Toupie’s granddam is the legend, Qerly Chin. It is impossible to start describing her influence or her importance in modern sporthorse breeding, as we would do her injustice. 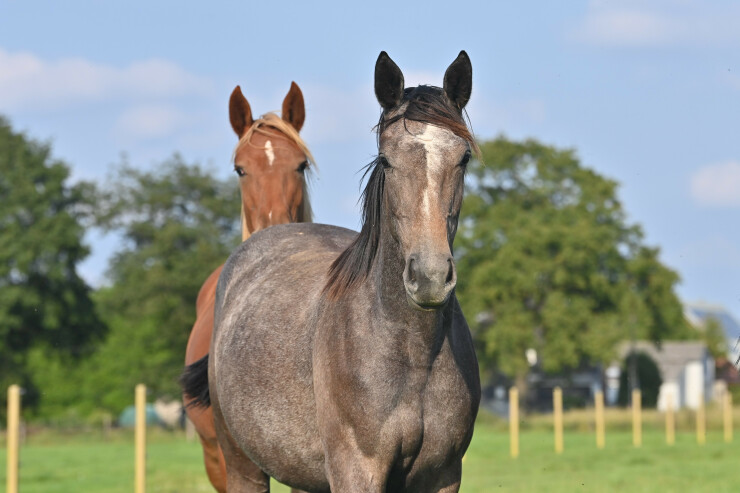 Amarone 2000 Z is a filly by Aganix du Seigneur Z and Cassini I. She is born in 2020 out of Cephale 2000 who was a meritorious sporthorse under Kim Colaers. Dam Cephale is also the dam of the supersire Dominator 2000 Z who won the Doha 5* Grand Prix and came 2nd in the Madrid World Cup. From her first 4 foals, 3 have been liscenced as stallions. Those are Dominator 2000 Z, Karman 2000 Z who competes in 1.40m classes as a 7 year old and the full brother of Amarone, Avenger 2000 Z. 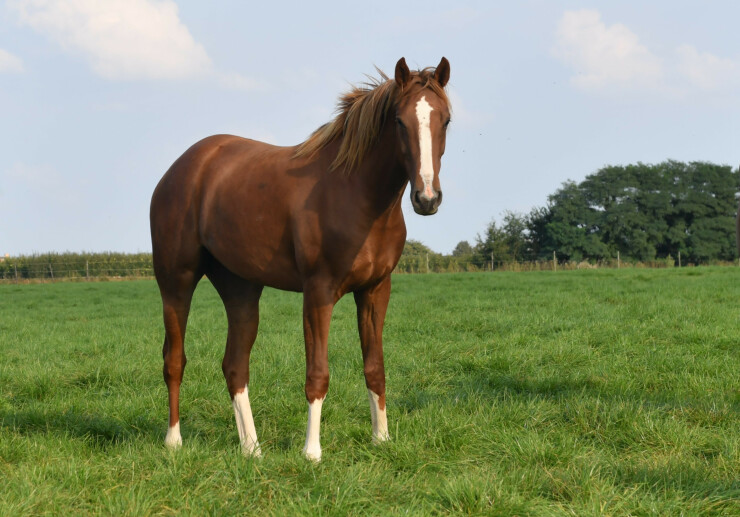 Coriana Girl Des Séquoïas Z is a filly born in 2019 by the prestigious sire Conthargos and the famous Coriana van Klapscheut. Coriana is praised for her impeccable technique, indestructible mentality and unparalleled quality. Coriana’s story runs in both directions. Looking back, she is a daughter of Uriana by Heartbreaker, the foundation dam the passed on those rare and sought-after qualities. She was a successful mare herself with both Nina Fagerstrom and Gilbert De Roock.

Next to Coriana, Uriana gave 3 more horses that competed in the top level of the sport, Blendy, Fenom and Farah van Klapscheut. And all these mares have created their dynasties. Coriana first gave Goriana by Vigo d’Arsouilles. She jumped up to 1.50m classes with Pilar Cordon and already produced to 1.45m performers. Goriana is even the granddam of the Belgian Champion of 7 year old horses, Odina van Klapscheut of the Stephex Stables. The next daughter of Coriana gave Mugano who jumps in 1.60m classes with Dan Kremer. Coriana’s second son, Koriano came 2nd in the Liege 1.60m Grand Prix with Dominique Hendrickx. Koriano is a regular winner at 1.50m level.

The continuously passing on of specific traits, crucial for top sport make Coriana’s Girl an asset for Mares of Macha. 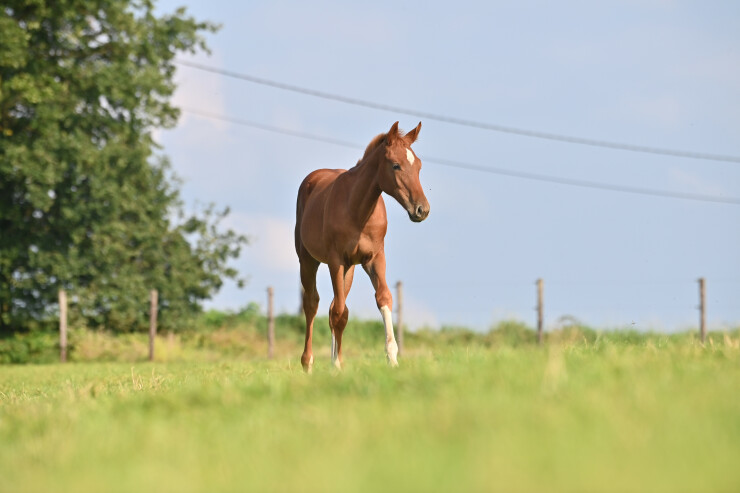 Hot Diamond di Villagana Z didn’t steal her name. This 2021 born filly is by Heartbreaker out of the dam of the Olympic stallion Emerald. It is often forgotten that both the dam and the great granddam of Hot Diamond and Emerald were successful sport horses and that sport is omni-present in the family tree.

But then again, it is understandable as just looking at the production of dam Carthina is a big task. She has now produced 6 horses that are successful at 1.50m level and up, 2 of them are liscenced stallions. Her daughters have given another 8 horses at 1.50m and higher. While processing that, keep in mind that Carthina herself is born in 2000.